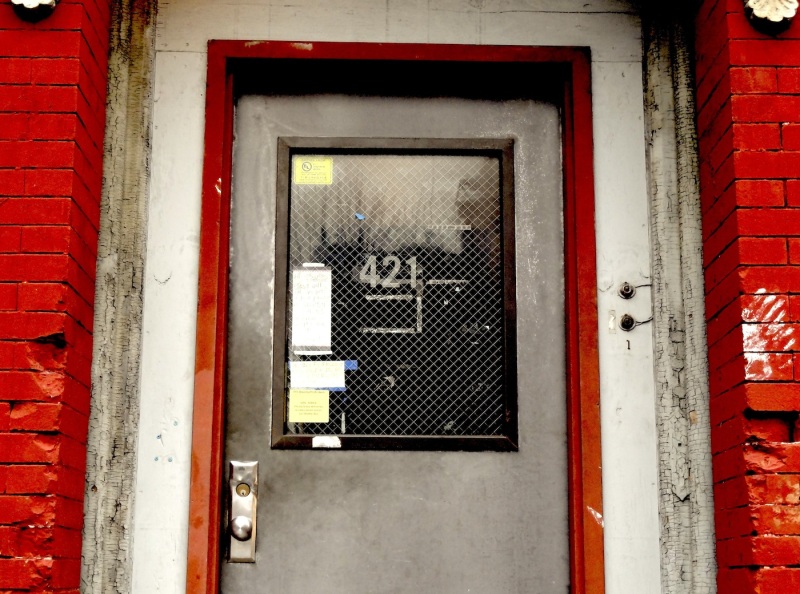 I’ve noticed also that I haven’t yet attempted a non-visual way of seeing this month. And so this – an aural map of Wythe Ave (sort of) – is my attempt to correct that oversight.

This is a list of popular (world) and indie music that are inspired by the 16 blocks of Wythe Ave I ply daily. Since I don’t have the ability to embed videos into my post directly, the reader’ll have to cut and paste the youtube links into another window.

1. Alcoholic Faith Mission, 421 Wythe Ave.  Check out this 2009 album by the Danish indie/alternative band, named after their address in Williamsburg and fully recorded here.  421 Wythe Ave is between Broadway and South 8th, just off my beaten path. Listen to the song, Nut in Your Eye here:http://www.youtube.com/watch?v=LAd3flpRdWU

2.  Brad Fiedel, Main Theme for The Terminator (from the Soundtrack).  For some reason, South 6th Street, with its sweeping vista of the Williamsburg Bridge, and its very industrial feel, reminds me of the metallic theme song from the first Terminator in 1984.  Listen to it here: http://www.youtube.com/watch?v=dpwWYOE3Y9o

3.   Bebel Gilberto, Samba de Orly.  South 5th is totally dominated by the inimitable Miss Favela – a Brazilian restaurant with rollicking live music that takes over the intersection every weekend.  Here’s something a little more contemplative, from the Rio Movie Soundtrack: http://www.youtube.com/watch?v=nhxvQHhkV1s

4.    Leonard Bernstein & Stephen Sondheim, West Side Story.  The neighborhood around South 4th is occupied by a community of very patriotic and very festive Puerto Rican families. I know this sounds very much like stereotyping, but I couldn’t help thinking America, from West Side Story: http://www.youtube.com/watch?v=4PtP1N5mu8c&feature=fvst

5.    Lamb, Lamb. From the vantage point of South 3rd, you can see the looming post-industrial hulk of the (former) Domino Sugar Mill. I fantasize about tearing through the half-ruined stairwells and factory floors of this monument, to the trippy drum n bass sounds of the 1996 debut album of Manchester electronic / alternative-music band, Lamb.  Listen to the opening track, Lusty: http://www.youtube.com/watch?v=lVjCUeglBsw

6.    黃耀明，春光乍洩 (Anthony Wong, Spring is On the Horizon). Two restaurants on the bleeding-edge of cool, an excellent burger-joint and an immense brick wall with epic graffiti.  Spring is in the air, but only in the decadent, desolate, ironic and cutting manner that chameleonic Cantopop veteran Anthony Wong sings it in his song, 春光乍洩 . This was also the Chinese-language title of a 1997 Wong Kar Wai movie, Happy Together starring Leslie Cheung and Tony Leung.  Listen here: http://www.youtube.com/watch?v=bWdS6YfFsTM&feature=related

7.    Jeff Buckley, Grace. South 1st is the home of Main Drag Music, a guitar and music store.  The young musicians and technicians in hoodies and jeans that enter and exit the place remind me of a young rock god that never was: the late Jeff Buckley.  Listen to his haunting cover of Hallelujah from his only complete studio album, Grace, and be chilled to the bone: http://www.youtube.com/watch?v=y8AWFf7EAc4&ob=av2e

9.   许美静，都是夜归人 (Mavis Hee, We All Return Home Late At Night).  North 1st is, in my mind, the bleakest intersection of them all, particularly when one is walking alone at night. I am reminded of Singaporean songstress Mavis Hee’s second album, released in 1997, that has her singing desolately about night, loneliness, disorientation and the loss of love. Here is the title track and its original MV: http://www.youtube.com/watch?v=gXPUiLSHlHc

10. Paris Combo, Living Room. Populated by a string of luxury condominium developments, and the excellent indie/alternative live music bar, Zebulon, I can only recommend Paris Combo’s 2001 neo-cabaret album Living Room as the soundtrack to the Metropolitan Street intersection. Listen to the sexy and sinuous track, Pas à pas here: http://www.youtube.com/watch?v=27iRTjabbaw

11.  Will Young, Echoes. North 3rd reminds me of London: contemporary and traditional, cosmopolitan and low-key, with great cafes, second-hand book stores and antique stores.  I know I’m not supposed to appreciate mainstream Britpop, but I really do like former British pop idol Will Young, particular since he seems to represent to me what I like most about London – suave, raffish, honest, enigmatic.  I think the lead single, Jealousy, is the perfect accompaniment to a strut down North 3rd to the supermarket.  Listen here: http://www.youtube.com/watch?v=9MHtrM-jf9o&ob=av2e

12.  Massive Attack, Mezzanine. North 4th is a juxtaposition of extremes – to the West, the gleaming luxury condominiums, newly-built; to the East, a post-industrial landscape reminiscent of those in Liverpool or Bristol.  Massive Attack’s seminal Teardrop comes to mind – a paean to rejuvenation, or in the case of North 4th, gentrification.  Listen here: http://www.youtube.com/watch?v=u7K72X4eo_s&ob=av3e

13.  Jack Johnson, Sleep Through the Static.  North 5th feels like a break-up.  Sandwiched between the post-industrial ruin of North 4th and the urbane buzz of North 6th, it is in a no-man’s land.  Jack Johnson’s 2008 heartbreak album is my recommendation for this intersection.  Listen to the devastating final track, Losing Keys, here: http://www.youtube.com/watch?v=9xBpy6aiOqg

14.  宇多田 ヒカル、ハートステーション (Utada Hikaru, Heart Station). North 6th is the most urban and bustling of all the intersections, with restaurants, cafes, and independent boutiques selling hipster fashions. I often take this street towards the Bedford Ave subway station (rather than the more staid North 7th), listening to the very-slick, very-urban, very-Tokyo sounds of Utada Hikaru’s 2008 album, Heart Station.  Here is my favorite track, Beautiful World: http://www.youtube.com/watch?v=Nulg1i28hkc

16.  الشاب خالد، حمامة (Cheb Khaled, H’mama “Dove”). There is a sense of finality, hope and possibility to the North 8th intersection. Each time, I reach it, I think to myself: “Phew, my work is done for today.” Then I stand at the Northern side of the intersection and look ahead to what lies beyond. These emotions seem to me to encapsulate the music of Moroccan rai superstar Cheb Khaled. Listen to an extract from the stirring and hopeful cover of an Algerian classic, H’mama, from his 2004 album, Ya-rayi: http://www.youtube.com/watch?v=f7xamFaptVI 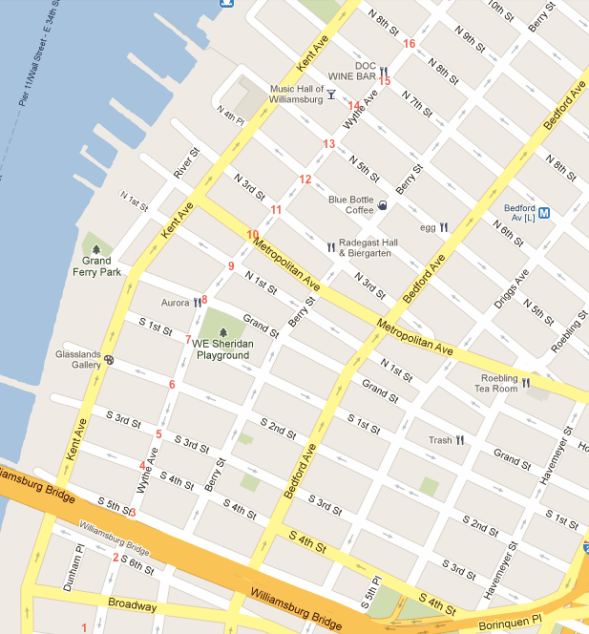 28 Feb This entry was published on February 28, 2012 at 10:30 am. It’s filed under Aural and tagged Brooklyn, Conceptual Art, Music inspired by Wythe Ave, Street Photography, Urbanism, Williamsburg, Wythe Ave. Bookmark the permalink. Follow any comments here with the RSS feed for this post.